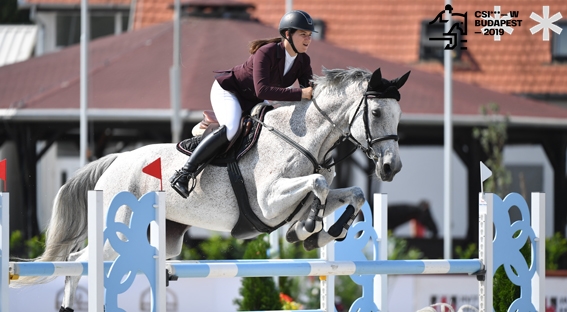 The CSI3*-W Designated Olympic Qualifier for Group C could not have started better for the hosting country as Hungarian riders took the first six places in the opening 130 cm competition.

At just 21 years of age, Csenge Ágoston on Cassiona D.L. beat the starting field packed with adults with a fantastic ride and scored her first international victory. In the name of the Jury Bohumil Rejnek and the Vice-President of the Hungarian Equestrian Federation, Kristóf Szotyori Nagy congratulated the rider. Second place went to Zoltán Márki on H.CS.R. Center, ahead of the last year’s ‘rider of the year’ prize winner, Szabolcs Krucsó, in the saddle of Chaccobo this time. Another young lady rider, 16-year-old Szabrina Plavecz, finished in fourth place on Királyhágó after a recent victory in the Middle Tour at Bábolna.

The young Hungarian-bred horses did really well as eight-year-old Sifu captured fifth place, guided by Attila Cser, one tenth of a second ahead of another eight-year-old, El Capitan, ridden by Attila Técsy, and seven-year-old Clintapoint, teamed with Gyula Szuhai.