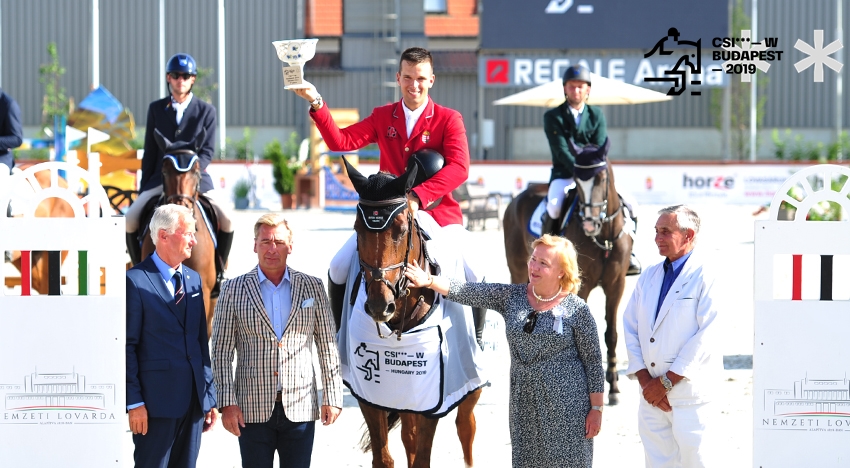 The highlight of the CSI***-W International Show Jumping competition’s last day was the Grand Prix with the total prize money of € 30,000. The very much anticipated class, which included 13 obstacles and a total of 16 efforts, reaching 160 centimeters in height, was worthy of the world-class flag. 54 riders managed to qualify based on the results of the past few days, but only 49 of them took on the challenge.

In the first half of the competition there weren’t any clear rounds, however some riders completed the course without faults. After the first few contestants it was clear, that it is nearly impossible to finish the course within the time allowed, and for a while it seemed like one penalty point will qualify them into the jump-off. But then, the excellence of the Czech’s, Zuzana Zelinkova cleared the course within the time allowed, and broke the ice. She was quickly followed by three other riders, thus the four of them, Zuzana Zelinkova and Ales Opartny from the Czech Republic, René Tebbel representing Ukraine, and the Hungarian two times winner of the CSIO Grand Prix of Budapest, Gábor Szabó jr. qualified for the jump-off.

The Nations Cup winner Zuzana Zelinkova was the first rider against the clock and trusting her horse she started with a strong pace. With cutting one stride from the first line she finished with a very good time, 45.04 seconds, but the high tempo resulted in a fault in the combination, which meant 4 penalty points for her. She was followed by her teammate, the European Championship gold medalist Ales Opartny, who also chose to cut the first line with his long-strided horse Sangris Boy, which resulted in a fault for him as well. He completed the jump-off with the same 4 penalty points in 47.30 seconds.

The Olympian René Tebbel representing Ukraine was the last but one, whose tactic was a safe clear round. He rode the first half of the course with a moderate tempo, but after making a fault on the combination he rose his speed and finished with 46.03 seconds, which was the second-best time. There was enough reason to be excited for the last rider, since he was the defending Hungarian champion Gábor Szabó jr., and there were no clear rounds yet. Gabó chose the tactic of a safe clear round as well, and with a conscious but energetic ride, which is so characteristic of the pair, he cleared the jump-off and won the Grand Prix bringing great joy to the Hungarian fans of show jumping! He rode the chestnut mare Timpex Bölcsész, who is bred and owned by István Tárbály, and has been a loyal partner of his in the national team for years now. Gábor Szabó jr. showed his special talent to the great number of spectators again. He has further developed his miraculous riding career after winning the CSIO Grand Prix in Budapest in 2014 with Timpex Cent, and in 2016 with Timpex Bölcsész.

On the fifth place, with only 4 tenths of second out of the time allowed, ended Andrea Herck representing Romania, beating the Lithuanian Donatas Janciauskas and the Bulgarian Angel Niagolov.

Ferenc Szentirmai, representing Ukraine, took 8th place with his fastest ride at 4 penalties. He completed an excellent round and was unlucky to have one rod down. Two further Hungarian riders finished with scorer positions. István Máté jr., who rode double clear rounds two weeks ago in Bulgaria in the Nations Cup with Chacrinue owned by Gábor Szombati, and the Nations Cup winner Balázs Horváth with Zordon.