Double victory for Gábor Szabó Jr. on the first day at the Gróf Széchenyi István Memorial 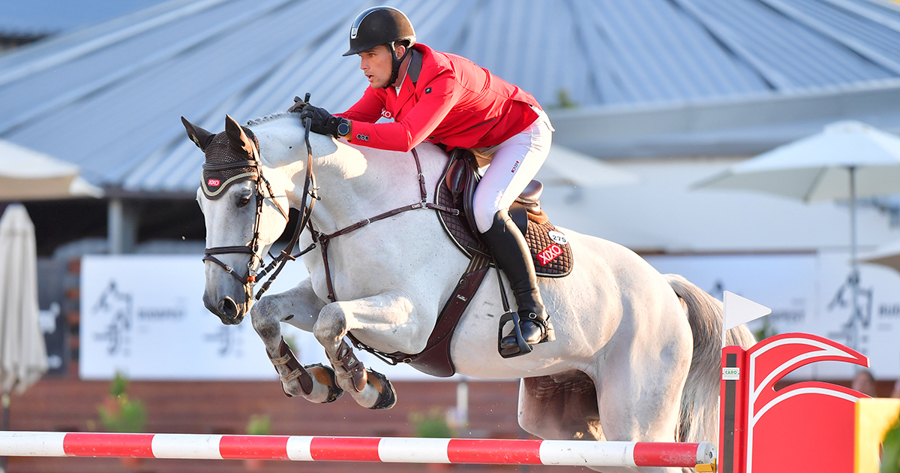 The Gróf Széchenyi István Memorial, held for the 32nd time this year, kicks off today at the National Riding Hall. Despite the special pandemic circumstances the number of entries exceeded last year’s due to an increased interest in the Budapest event also by international riders. Thanks to this the strongest field of the recent years will compete in the four-day challenge. Thus, it is an even greater joy for the organizers that on the first day Hungarian riders took the victory in three out of four competitions.

Macedonian victory in the competition of young horses

Thursday started with the competition of the 6 to 7-year-old horses at 120-125 cm. Here Luka Zaloznik scored the fastest time on Mark 19. The most successful young horse of last year’s competition, Hungarian-bred Ching, was only three tenths behind the winning pair and finished second this time with László Tóth in the saddle, ahead of Portuguese Rodrigo Giesteira Almeida and Indian Gold. Máté Berkes is victorious in the Bronze Tour

The 130 cm two-phase Bronze Tour was the second competition for the prize of the Hungarian Sport Horse Breeders’ Association presented by the president of the organization, Miklós Jármy. Máté Berkes on Casalido proved the best of the competition, ahead of the Austrian Willi Fischer, who won two years ago in the U25 category on Dollargirl. Third place went to Tomas Kuchar from Slovakia in the saddle of Leonardo Van De Leeuwerk. The remaining places were taken by lady riders, Annamária Zárug on Coolmann in fourth, German Elisabeth Meyer in fifth and Italian Simone Coata in sixth place.

Hungarian dominance in the Silver Tour

In the 140-cm competition a field of 64 competitors lined up for the Prize of the Hungarian Equestrian Federation and Alpenspan. The local riders performed in ballistic form as only one foreigner pair could get into the top six.

Gábor Szabó Jr. recorded the fastest time and won by more than a second on his horse Timpex Fényév. The competitor was congratulated by Kristóf Szotyori Nagy, Vice President of the Hungarian Equestrian Federation, and by Wolfgang Pirker, Sales Manager of Alpenspan. Balázs Varga closed in fourth place on his own bred horse, Justice. Fifth place went to Attila Técsy and El Capitan, while Balázs Horváth in the saddle of PM Chaccera ended sixth.

Gábor Szabó Jr. excelled in the Gold Tour as well

More than 110 rider and horse pairs competed in the 150 cm 5000 Euro competition against the clock for the Prize of the Hungarian Equestrian Federation. The foreign riders had a great start, encountered no problems with either the height of the fences or the parkour, their horses jumping supremely, proving their routine. Generally, Hungarian riders have much less opportunity to try themselves at this height, but with the introduction of the GP series, they are taking part in an increasing number of 150 cm competitions, and this was reflected in today’s performances. Not only did Hungarian riders not hang out of line, they even dominated the head of the field.

Gábor Szabó Jr. was a permanent once again, as he rode XIXO Lord Classic to victory with a lead of more than two seconds and his other horse Chabal TH to third place out of 110 competitors. Only Portuguese rider Rodrigo Giesteira Almeida could approach him, finishing second on Edgar.