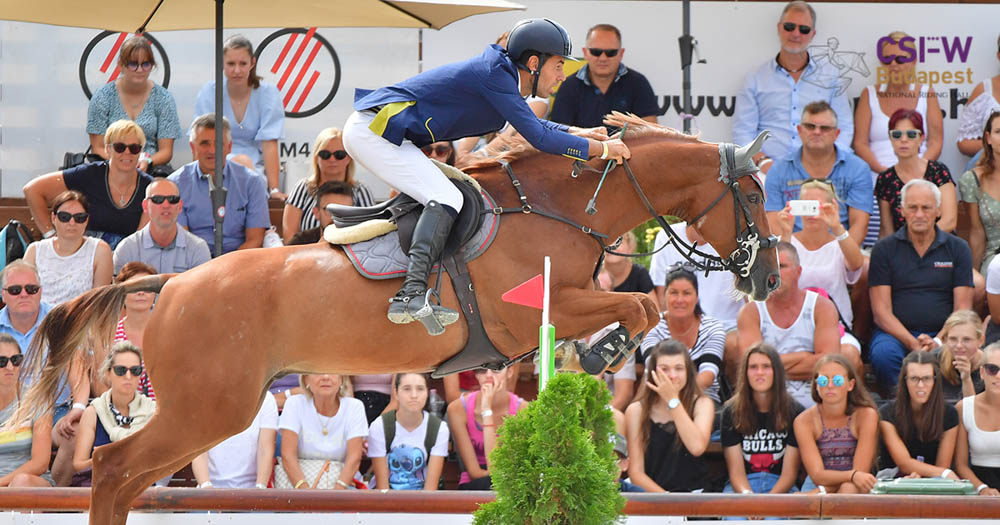 The featured event of the Gróf Széchenyi István Memorial was the Grand Prix, a 150 cm 37,400 Euro competition where qualified riders could collect world ranking points as well. The field was multinational with 56 competitors representing 24 countries, among them fifteen Hungarians.

The parkour was completely different to yesterday, with new technical focuses. There were a relatively large number of faults at the triple jump, which, as usual in Grand Prix competitions, was located directly in front of the stands, slightly confusing the horses due to moving crowds distracting them. In addition, they had to make a sharp right turn to get there, so many riders committed faults up to the first element of the combination. Many still made mistakes on the penultimate yellow steep that followed a complex jump. Such minor errors at such a height were already enough for a fault to slip in, causing the rider to lose their chance at winning. Eventually, ten riders were able to perform clear rounds, including László Tóth Jr., so the local fans could cheer on the Hungarian rider in the jump-off.

After a great first round László Tóth Jr. on Rádiháza-Echo was confident. The Hungarian rider rode well in the jump-off, chose sufficiently tight turns, and his horse jumped fantastically, so we could expect a good result. The strength of the field is shown by the fact that the local specialist of speedy rides was finally able to take fifth place in a field studded with world-famous names.

Second starter of the jump-off, Italian Roberto Turchetto was fastest on My Cool Passion. His horse has a really special technique and spends as little time in the air as possible, seemingly rubbing the bars with his belly, but that is why he is extremely fast.

Friday’s winner, and Saturday’s second-place finisher, Laura Renwick, couldn’t beat the Italian pair, even though she masterfully rode her Dublin V in the jump-off. Other competitor with a clear round was Patrick Lam from Hong Kong on Claron. Yesterday’s winner, Alain Jufer, finished seventh committing one fault, squeezing Austrian Gerfried Puck to eighth place.

Our current Hungarian champion, Zsófia Vándor, rode without any fault but only until the last jump, like yesterday, and finished with four penalty points as did Vince Jármy, István Fazekas, and András Kövy Jr.