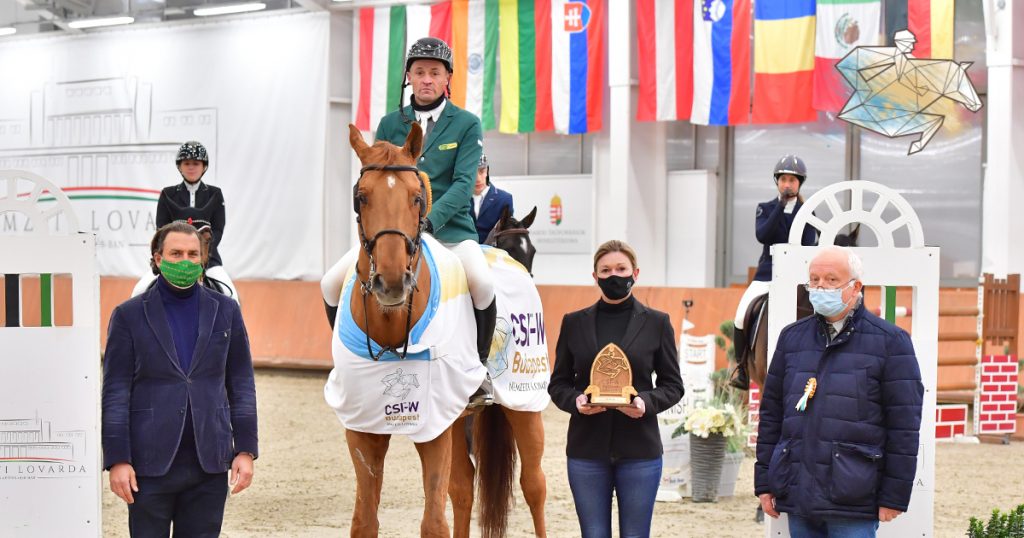 Saturday’s most prestigious event was the 160 cm Gold Tour. Here, the riders rode not only for the prize money, but also for the Longines Jumping World Cup qualification and for valuable points. This is especially important in the current situation, as many major international tournaments have been cancelled, giving riders fewer opportunities to collect points. This is why such a high-quality field has been put together in Budapest including riders from different countries with serious chances to be qualified. This is also reflected in the final result, as the clear-cut favourites finished in the top three.

The first round was obviously difficult, worthy of the competition standards. Accordingly, very few clear rounds were registered and only two riders got into the jump-off. Polish Jaroslaw Skrzyczynnski repeated his perfect performance and took victory.

Austrian Gerfried Puck had to settle for second place. The fastest first round was scored by Andrius Petrovas but he collected four penalty points, finishing third. Hungarian riders were not lucky enough to get into the jump-off, as many of them committed only slight faults but even so they achieved good places. Hungarian Virág Weinhardt finished fourth, followed by Péter Szuhai and Zsófia Vándor, so three Hungarian riders and horses closed in the top six. Flóra Füzér also finished among the placed riders with four penalty points. The fact that all four Hungarian riders represent the young generation is positive for the hosting country. These riders have proven themselves in recent years in international competitions for their age group and now they had the opportunity to show up among seniors at this featured event.