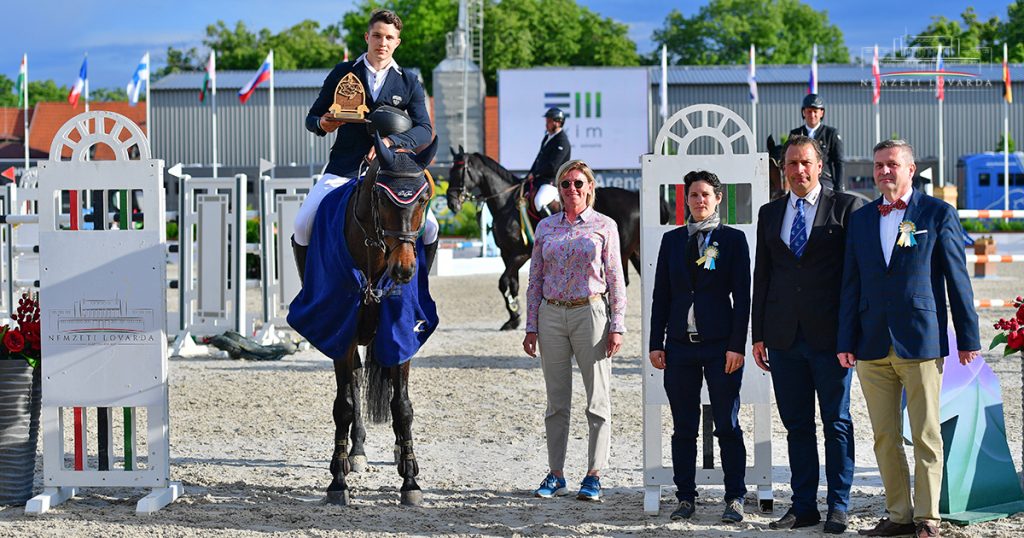 The featured event of the Count István Széchenyi Memorial was the Grand Prix in two rounds.

Forty-four riders qualified for the 145-cm event, which was also the final of the Gold Tour. After the first round, the top eleven riders, including eight Hungarians, continued competing in the second round. The course was quite difficult as, in addition to the all-important prize money, riders could collect qualification points for the Longines World Championship. The course was a real challenge and many horse and rider pairs had to give up the competition and the public had to wait until the tenth starter to see a clear round.

The Hungarian young riders’ national team made a sensational performance, as all four finished with double clear rounds, taking the first four places in this premium prized, adult Grand Prix for World Ranking points. The winning pair was the gold medallist of the Kishunhalas GP, Tamás Dömse and Conquistador, ahead of multiple Young riders’ Grand Prix winner Aliz Alasztics on Concordia HB. Another Victory for Szuhai Family – Gyula Szuhai Jnr. Best U25

The penultimate event of the Count István Széchenyi Memorial was the final of the 135cm U25 competition against the clock.
Only a few riders delivered clear rounds due to a difficult parkour fitting a final. For a longer period, the first starting Czech, Tina Larysova, was in the lead with a time of 65.47 seconds, but 14-year-old Gyula Szuhai Jnr. rode more than a second faster. So, after his brother, he also won a gold medal. The last day of the Count István Széchenyi Memorial continued with the final of the Bronze Tour. In the 125cm competition against the clock, designed by László Karádi, 58 riders lined up at the starting line and the places were decided after a highly exciting competition.

Only 12 years old, Rodrigo Szuhai has participated in the Silver Tour before, even capturing a second place, but according to international rules he can only compete up to 130cm, so this time he could only do so in the Bronze Tour’s final. Despite his age, the already experienced rider took the victory in the saddle of Chacco Boy after a confident clear round in a field of adult riders. Yesterday’s winning pair, Vilmos Göttler and Jégvirág, finished second in the final, ahead of Loren Lukács, Péter Szuhai, and Eva Bohák-Debreczeni, the rider reaching the podium in the previous three days. The last day of the 30th edition of the Count István Széchenyi Memorial started with the final of the 6-7 year old horses, where 30 rides competed. Nine of them, mostly representing the older age group, made it to the final. Three horses completed the three previous days with clear rounds, so as expected they jumped the best in the final. Third place went to Austrian Fritz Kogelnig Jnr. int he saddle of 6-year-old Utopie, followed by Gyula Zárug on Cold Blue Boy and Ádám Faluhelyi on Cordis. Also with a clear round in the jump-off, Virág Weinhardt finished in sixth on London’s Chagana, ahead of Eliza Szigeti and Máté Lehotai.