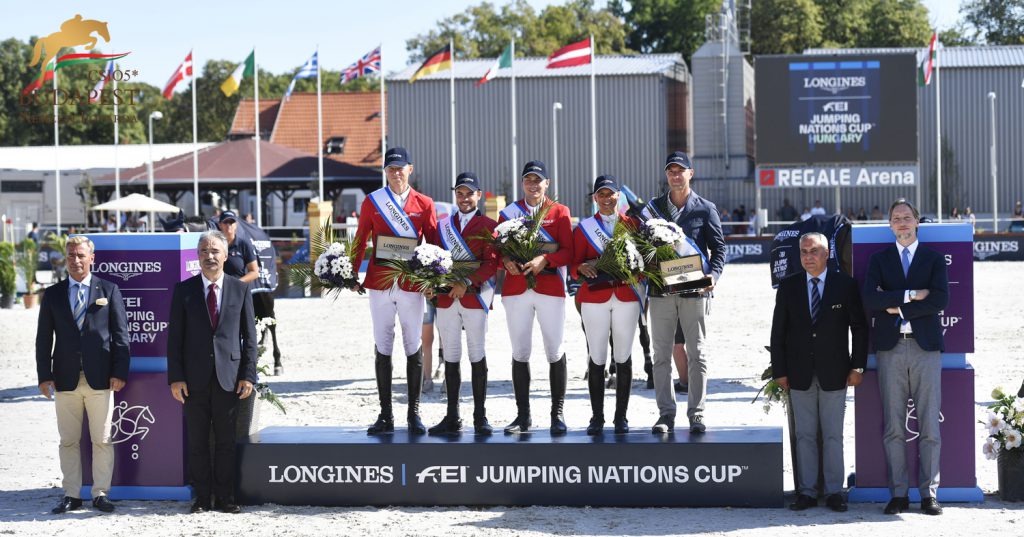 The Nations Cup with a total of 200,000 Euro in prize money, the most awaited competition at Longines FEI Nations CupTM Jumping of Hungary CSIO5* Budapest took place before a full house Sunday afternoon.

On this occasion the president of the International Equestrian Federation (FEI) Ingmar De Vos paid a visit to the event and to Hungary for the first time. He expressed his full satisfaction and added that the National Riding Hall is a perfect location for highest level competitions.

Werner Deeg designed a very fair but selective course. The riders and horses challenged again by heat had to complete two rounds with a half-hour break on a course with 15 efforts at 160 cm.

Today Marcus Wallishauser chef d’équipe’s Austrian team proved unbeatable with six 0 penalties rounds. Two of the three clear rides belonged to Julia Houtzager-Kayser and Felix Koller but the rest of the team Christian Rhomberg and Max Kühner also scored one clear round each. Szabolcs Krucsó on Chacco Blue II. finished with one clear round and 4 penalties in the second round.

Gábor Szabó Jr. on Timpex Bölcsész scored 4 penalties in the first round and finished clear in the second. The reserve rider András Kövy Jr. replaced Mariann Hugyecz after the injury of her horse in the saddle of Heuréka. The couple closed in both rounds with 4 penalties. The most experienced Nations Cup rider Balázs Horváth was the last rider of the Hungarian team on Zordon. The pair took the pressure well: they ended with a clear round and with one fault in the second round and so they secured second place for the Hungarian team.

The silver place is a historical success for Hungary. The team in the company of Austria qualified for the first time for the Nations Cup series’ finals 5-7 October in Barcelona.

Norway, who was one of the favorites before the competition, finished in third place. Mikael Kolind’s, the Norwegian chef d’équipe’s team competed with excellent riders, the members of the Gulliksen family (Victoria, Johan-Sebastian and Geir) and member of the FEI Young Rider Academy, Lisa Ulven. Despite Geir Gulliksen’s brilliant clear rounds, the Norwegians closed with 13 penalties.

Another favorite, Portugal, finished 4th and the Czech Republic 5th, with 20 penalties each. Poland closed the contest with 24, Greece with 38 and Bulgaria with 52 penalties.

A busy autumn is waiting for the Hungarian team as they will participate at the World Equestrian Games in September in the USA and afterwards in October in the Longines FEI Nations Cup’s final in Barcelona.

We wish them success and congratulate the Hungarian team and chef d’équipe Isván Németh on today’s excellent achievement.