László Tóth Jr.: “I will not give up my dream to participate in the Olympics” 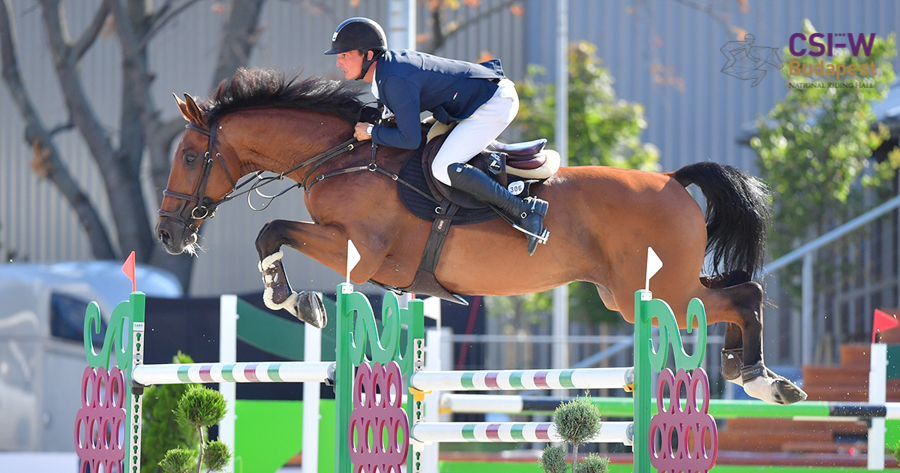 László Tóth Jr., leader of the Hungarian rankings has great odds even in two competitions at the Count István Széchenyi Memorial. He was already the best in his category last year on his self-bred, young horse, Ching. On his other horse, Rádiháza-Echo, he can prove himself in the World Cup qualification.

You finished fifth in the Gold Tour, and you have already won gold and silver in the competitions for young horses. How happy are you with a start like this?

László Tóth Jr.: I am a perfectionist but of course I am satisfied with the results. I took fifth place in the Gold Tour on Thursday but I believe my horse has more in store. I will try to time our form for Saturday’s and Sunday’s Grand Prix events and to give maximum performance in them.

Ching is of your own breeding and very successful in her age group. How do you view her future?

László Tóth Jr.: Even other riders asked me this question many times but it is hard to answer as she is a very small mare and this kind of stature is not an advantage in show jumping. However, she has a big heart and does everything for the rider. Her jumping ability is also exceptional. I have already competed on her at 145 cm this year and she proved that she can jump this high despite her small figure. This weekend I chose the 130 cm competition which was easier for us, as we were preparing for the season in 3* events early in the year. What do you expect from the Grand Prix? What do you think about the field and the other competitors?

László Tóth Jr.: To be honest, I focus on us and not the others and I always try to give my best. I believe we face the same risks but at the same time have an equal chance at luck. My horse, Rádiháza-Echo, meets the European standards, so it will be up to me what condition I can be in my head to see if I get overexcited. Luckily, I’m not the excitable kind and I’m more excited for my students when they’re on the field.

You have to stand in the competition not only as a competitor, but also as a coach, since you are the trainer for the Olympian judoka, Miklós Ungvári, competing in the VIP Tour.

László Tóth Jr.: Yes, the pressure is higher as I am responsible for somebody else, too. We started working with Miklós three weeks ago and he’s really done a lot to achieve such a good result in the VIP tour.

Your clear intention is to participate in the Olympics. Does the postponement of the Games due to the pandemic situation affect your plans?

László Tóth Jr.: I will not give up on this dream, and I strongly hope that the FEI or the International Olympic Committee will increase the number of qualified riders for the 2021 Tokyo Olympics, as both the European Championships and the World Championships – as qualification tournaments – are likely to be postponed as well. So I will do everything I can to realize my dreams.