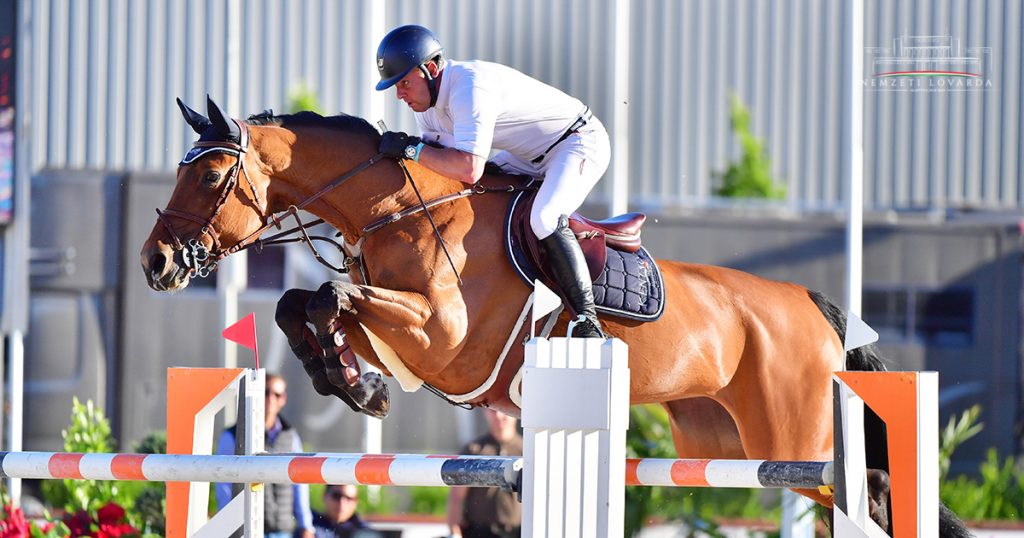 The Count István Széchenyi Memorial continued with the semi-finals of the VIP, Silver and Gold Tour, and the first round of the 120cm Bronze Tour.

Romanian Victory in the VIP Tour

In the 110cm VIP Tour the previously third placed Catalina Sfetea on Dyra took her chance confidently and prevailed, ahead of Anna Jázmin Nyíri and Zsófia Hermann, so the Romanian rider managed to celebrate victory. Multiple amateur champion Éva Bohák-Debreczeni is back in top form and finished with both her horses on the podium in an international field of 54 riders. She won on Cortez and was third on Sáripuszta Hadnagy, just behind Maja Kiss in the saddle of Bob De Bouwer. Gyula Szuhai Jr. was Best in U25 Category

The 130cm track caused no problems for the young Hungarian riders in the U25 competition, taking the first four places with lightning fast rides. After finishing second in the semi-final, Gyula Szuhai Jnr. recorded a sensational speedy ride, taking the lead and winning the competition. At the end no one endangered him as second placed Julia Nagy and third Máté Lehotai were more than 3 seconds slower than him in the second phase. Henri Kovács and Tambourino Fastest in the Silver Tour

The 130cm Silver Tour was a two-phase competition and also brought great excitement, as there were only a few clear rounds, with the top three riders separated by only tenths of a second. The winner of the battle was Henri Kovács, riding his own-bred horse Tambourino. Second place went to Szabolcs Krucsó on Chippendale, ahead of István Máté Jr. and Roland Kovács. The final and most demanding event on Friday seemed to be quite a marathon with 82 starters aiming to qualify for the Sunday’s Grand Prix.

In the end, German Andreas Brenner captured the victory after an incredible fast track, followed by Krisztián Búza on Landstream. Zoltán Czékus on his 8-year-old stallion, Castro, delivered an excellent round as well and took third place ahead of Czech Alena Machova.