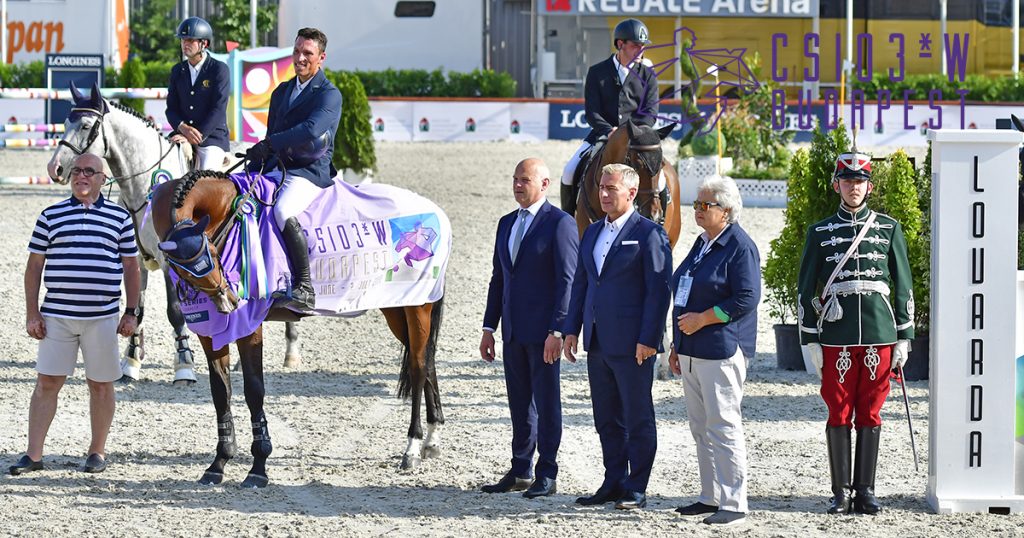 The featured event on Thursday was the CSIO3* Grand Prix presented by the Ministry of Defense. Riders from 15 countries lined up for the €52,000, 150cm competition in sweltering 36-degree Celsius heat.

Swiss course designer, Julien Pradervand built 13 obstacles with 16 efforts at the challenging track where spectators had to wait until the 13th starter to see the first clear round. The most fences fell at a fragile vertical and in the triple jump.

The next perfect ride was showcased by Brazilian Matheus Correa with Zeus, owned by Hungarian Csilla Lévai. Then Jörne Sprehe, a regular and successful German participant in Hungarian competitions, took the lead with a lightning fast ride on Hot Easy.

After him, the Swiss Thibaut Keller with Happy Girl T and Dutch Demi van Grunsven left the course with no penalties. The seventh rider who made it to the jump off was Angelos Touloupis representing Greece. Omar Bonomelli from Italy did not touch any fences but was not fast enough and got time penalties.

Seven obstacles and eight efforts had to be overcome on the 300-meter course of the jump off. Despite the extreme heat, and a technical and testing first round, several riders were able to make clear rounds again.

The first starter, Wout-Jan van der Schans lost some valuable seconds due to a few kicks by his horse. However, the second rider, Matheus Correa on Zeus could not make is faster than the Dutch pair. Then came German Jörne Sprehe and took the lead with another quick clear. He seemed to prevail until last rider, Angelos Touloupis with Lord Mexx, who posted not only a double clear, but was faster than any other rider.

From the 42 riders in the Grand Prix ten represented the hosts. Among them Eszter Kalán with her homebred mare, Gareza, achieved the best Hungarian result with four points.

The special prize of the Ministry of Defense was awarded to the placed riders by Gábor Schmidt, Deputy State Secretary for Sport. The winners were also presented a valuable glazed horse statue and the two porcelain vases by Bachar Najari, majority owner of Hungarian Zsolnay Porcelain Manufactory Zrt. Vilmos Lázár, President of the Hungarian Equestrian Federation, also congratulated the winners.